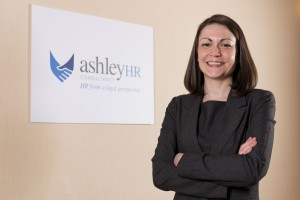 Cerys Ashley, of Ashley HR, spoke about the additional pressures the legislation will place on already-struggling small businesses.

“Many small businesses will struggle to afford this. It comes at a time where wage costs have already increased with the introduction of pension auto-enrolment; this is another pressure employers are facing in already tough times.”

The 1st of April this year saw the new National Living Wage (NLW) introduced where workers aged 25 and above will earn a minimum of £7.20 per hour – a 50 pence increase to the previous minimum wage. In practice, this is an additional age-band for the National Minimum Wage.

Mrs Ashley continued: “Whilst this is good news for workers aged 25 and over in the short term, this may not be a positive move in the long term with many jobs under threat if small businesses struggle to afford these additional cost increases.Businesses that require a large amount of minimum wage, labour-intensive roles will be most affected.”

The care sector has been identified as a potential area where this legislation will be felt the hardest. Mrs Ashley explains how the industry will be feeling the pinch after yet more changes in legislation increase the costs of running a care home.

“In recent times Local Authorities have reduced the fees they pay for care, and now the wage bill for these businesses has increased and will increase further in the future with the NLW set to increase to £9 per hour by 2020. It may not be viable for a lot of these businesses to continue to operate. Not only is there a risk of potential job losses, but the service users who rely on the care homes for their care and accommodation will need to be accommodated elsewhere, with Local Authorities having to pick up the pieces.”

One such care home has expressed their concerns over the legislation. Cwm Care, which has a number of Residential Care Homes specialising in caring for young adults with learning disabilities, is one small business that will struggle with the change. Managing Director Meg Musa said: “This will cost us another £3,000 per wage cycle; which is every four weeks. Annually, this will hit us for nearly £40,000.”

Mrs Musa explained how the impact of the increased wages will affect the sustainability of the business, as well as employees’ futures: “Our fees are fully funded by social services at present, but if we raise our fees to accommodate the increase in running costs, the difference will not be covered by social services due to budget cuts, forcing us to make cuts in other areas. Future recruitment could be affected which will lead to less job creation, and more pressure may be placed on our junior staff in order for us to cope with demand.

“We support the increasing of wages in theory, and larger businesses may be able to afford these wage increases, however small businesses that already have very tight margins need more support from the government to be able to afford these increases and to survive as a business. We want to safeguard our staff‘s jobs in the long-term. However, I fear that, for small businesses, by raising wages in this short-sighted manner it will actually place jobs at risk.”

Mrs Ashley raised issues that may transpire internally, stating that those in more senior positions but on wages that now are only slightly above the NLW may feel aggrieved that they’ve been forgotten in the reform: “I have already received calls from a number of my clients regarding concerns raised by employees in supervisor/manager roles and who are currently earning just over £7.20 per hour. These employees have complained that it’s unfair that their colleagues – who have less experience and responsibilities than them – are now paid similar amounts to them.

“These employees are effectively asking to be paid more, because they see the closing of the gap between their pay and the pay of junior staff as unfair. Some of my clients, many of which are small businesses, are already feeling the pressure to increase the wages of the more senior staff in order to combat this, thus creating further costs and pressures on the business’ viability. This pressure is set to continue as the government plans to increase the NLW further over the next four years.”

Mrs Ashley explained how businesses can attempt to diffuse the stress on the increased wage costs: “We are helping businesses review their options whilst treating workers’ rights respectfully. Some are considering a freeze on recruitment, others are looking at reducing costs such as overtime and bonuses, and others even exploring the possibilities of redundancies.

“However, employers need to proceed with caution. Certain changes could raise contractual issues, and in some cases employee consent may be required to implement the change. Employers also need to be careful to avoid implementing a measure which may amount to age discrimination. Employers who are considering such changes should seek professional advice before taking action.”