SOCIAL MEDIA POLICY KEY TO FUTURE OF HR, AS EMPLOYMENT LEGISLATION UNDER AN EMERGING THREAT 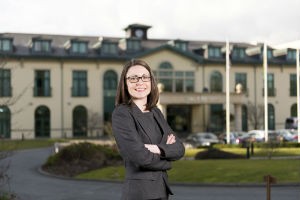 (Director of Ashley HR Cerys Ashley at the Vale Hotel)

Social media dictates the way many of us live our lives. From how we communicate, to how we digest news, to how we perceive political discourse.

An emerging role that social media is playing is how employees are managed, as well as how employers govern staff with policy in the digital age.

This was the message from Cerys Ashley, a human resources and employment law specialist, who delivered a seminar on social media misconduct at The Vale Resort to delegates from public, private and third sector organisations.

Mrs Ashley, who heads up Ashley HR, said: “Reputational management is key to all organisations, and the risks that brands are exposed to are very real. Social media, in varying degrees, is an open source; so the public nature of posts and communications is a huge issue in terms of worldwide accessibility.

“Inappropriate, abusive, offensive or controversial posts by employees may bring the organisation they work for into disrepute; regardless of whether it is posted during non-working hours and completely unrelated to the employer.”

Examples were discussed and analysed by delegates from real-life cases in the UK where organisations had dismissed staff due to comments they had made on social media. Each case was reviewed, and debated on its merit, as well as considering the relevant employment legislation and case law, to determine whether the dismissal of the employee was fair.

“An organisation must prove that, at the time of the dismissal, it believed the employee to be guilty of misconduct” continued Mrs Ashley, who presented alongside her colleague Angela Coombes of Connective Business Solutions. “In some cases, the employer had been found to have acted unfairly by dismissing the employee, mainly due to the lack of a social media policy in place, or due to the ineffective nature of such policy; including poor wording.”

The issue of monitoring was debated, as well as the accountability of employees on long-term sick leave: “All monitoring of employee electronic communications must be consistent, fair, objective, and with mutual trust upheld. Employees have the right to a private life as well as private communications, until it infringes the rights of others. Clear policies are required, so that employees understand what is and is not acceptable and, most importantly, what the potential consequences are if they breach the policies, including disciplinary warnings and/or dismissal.”

The underlying message for delegates was that a robust social media policy must be implemented by all organisations. Mrs Ashley said: “The policy must cover all platforms of social media, for business and personal use. Clarification on use of social media during working hours, as well as during sick leave, is recommended. It needs to be linked to a separate disciplinary policy, which is clearly communicated and distributed to all employees , with supporting training on the issue a must.”

Cerys Ashley was speaking to delegates who attended the Social Media Misconduct seminar held at The Vale resort on Tuesday 5th July.